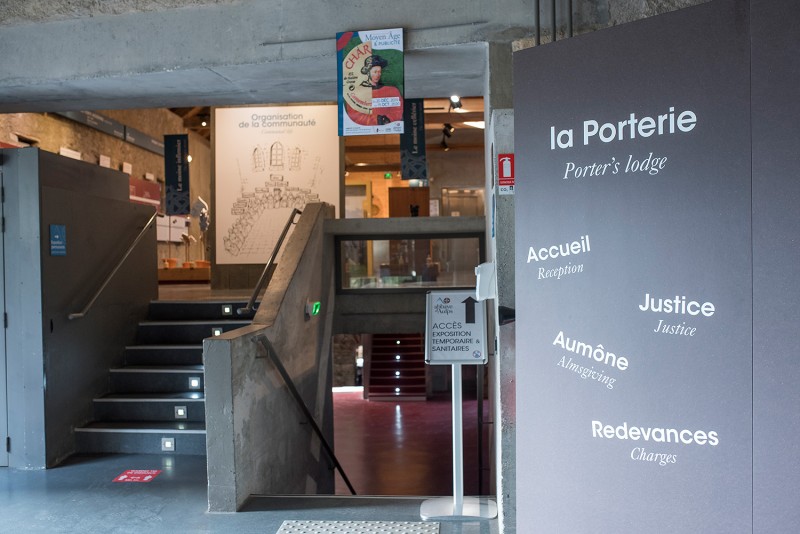 Visitors are welcomed into the entrance hallway as if they were arriving during the time when the monks were here. You can discover the ancient ruins as well as the architectural model of the 3 hectares of the monastic estate as it was during its prime.

On the first floor the permanant exhibition in made up of 5 periods in time which allow you to enter into the world of the Abbey of St Marie d’Aulps.

Area 1 :
The organisation of a monastic community

How was the community organised?

What activities did the monks participate in? What did the Abbot and the Prayer monk do? What did the cellarer and the key holder have to achieve? How was the day of a monk organised?

These are just some of the questions that come up : the answers can be found using different audio, visual and tactile tools. You are able to penetrate the mysteries of monastic life using your curiosity and through handling different objects.

Area 2 :
The Abbey of Aulps through all the ages

An historical timeline enables visitors to follow the abbey’s development in line with events in the Savoy region as well as Europe and France as a whole.

There is also insight into the works and character of Saint Guerin-the abbey’s famous second Abbot and Bishop of Sion.

Area 3 :
The Abbey and the outside world


This area uncovers the noble families who donated to the Abbey and who created a monastery reaching far out beyond the borders of the valley.
New – This room is full of juicy anecdotes about the Abbey. From the peasants revolt to the list of the monks possessions just before they left the valley you pass through the assaults of the monastic justice system.  The 7 sides of the abbey that you have always wanted to discover but never dared to ask will all be revealed here!

In this toom there are two films to watch where you can discover two aspects of the history of the Abbey of Aulps.
-  The life of a Cistercian monk: A short film retracing the life of a monk from his admittance into the abbey until his death
- The Abbey of Aulps and a history of its destruction. In this film you will discover the surprising history of how this medieval monument was destroyed and ended up in ruins.

Area 5 :
The knowlege of plants


This last section of the visit is dedicated to the theories and knowledge doctors in the Middle Ages would have used.  Through the studies of Hildegarde de Bingen on the theory of moods we discover  differnt ways of using and preparing medicinal plants with the materials in the exhibition ( grinding and distilling).

This room also gives you the chance to find out more about the secrets of the plants used in the gardens of the Abbey Estate.
Accessibility
Theme:
Text:
Share :