The Aulps Abbey Discovery Centre Gardens have walls to protect them from cool winds, creating an inviting and warm space. There are two terraced gardens, the first is the botanical medicinal garden (Herbularius); the second (lower) level is a medieval vegetable garden (Hortus). The Herbularius, or medicinal garden, is a "living" demonstration of medicinal plants which are referred to in the 5th part of the indoor exhibition at the Visitors' Centre: the abbey's modern heritage. 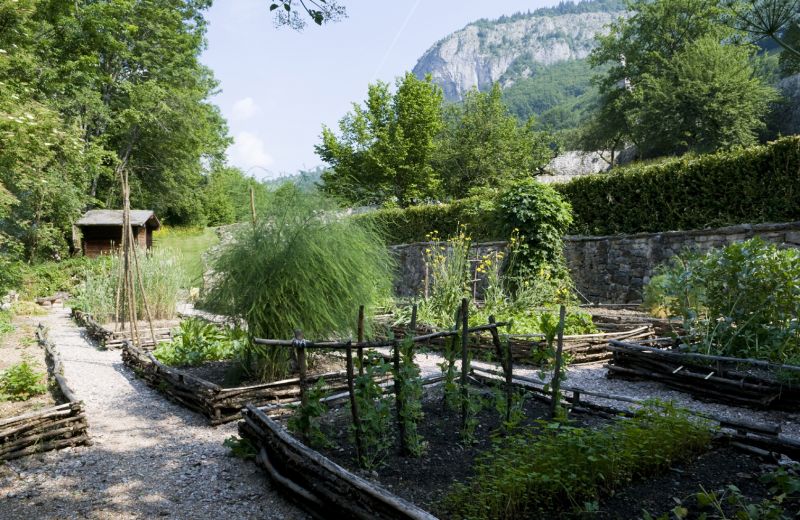 The garden is organised into 25 beds and classified according to the principal uses of the plants in traditional medicine (digestion, cardiovascular system, respiratory system, nervous system, motor skills...) It contains some 80 plants  (species and varieties). The presence of many of these plants in medieval times was proven in a study by Stéphane CROZAT in May and October 2000.

The medieval Hortus (vegetable patch) answers an often-asked question: what did the monks eat? It also gives clues about what everyone else ate in the Vallée d'Aulps in the Middle Ages. The garden was created in partnership with La Guérinière Association and the CCVA under Stéphane CROZAT. With 14 raised beds framed in horse chestnut, there is space for 73 plants (species or varieties) similar to those grown in the Middle Ages and grouped together in four sections to make it easier to understand: aromatic plants and condiments, vegetables, wild plants and larger fruits (to which can be added smaller fruits).
Both gardens are maintained by volunteers from La Guérinère Association who are helped with major projects by the CCHC. The experimental nature of many of the beds makes for a constantly evolving space (notably in the vegetable patch, based on the success/failure of the species and varieties used).
Accessibility
Theme:
Text:
Share :